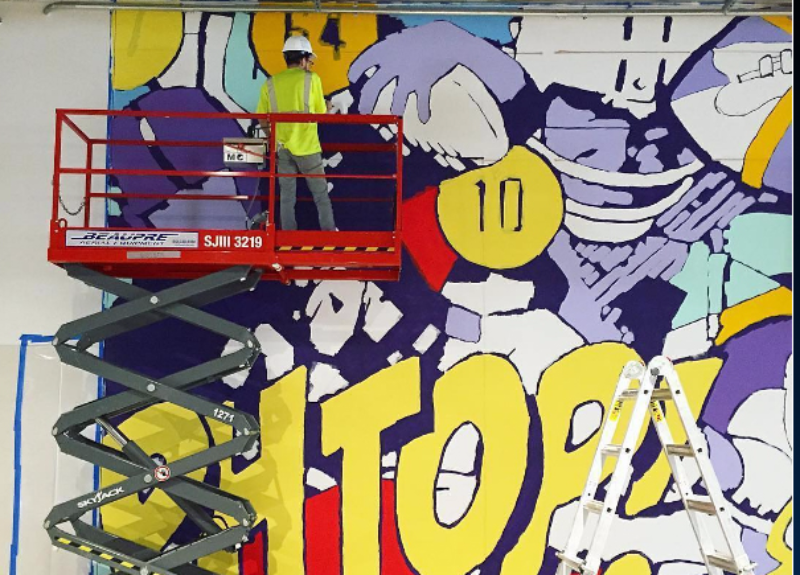 The beams were raised, the field went down and now it’s time to cover the walls of U.S. Bank Stadium. Last Friday the Vikings and the MSFA were given the keys to the building from the stadium’s builder Mortenson Construction and over the weekend the decorating began.

Earlier this week, work began on placing 350 original pieces of commissioned art and 250 pieces of framed photography throughout the building. Curated by Sports & The Arts, local artists submitted previous art and their ideas for work in the new building before being handpicked to have their art on full display in U.S. Bank Stadium.

Along with photographs and sculptures, work on two large hand-painted murals on the walls of the stadium’s main concourse started this past weekend. Minneapolis resident Greg Gossel uses words, images and gestures to showcase a visual history of change in a  17’ tall-by-85’ long mural, “The Vikings Are Coming!” located on the stadium’s north side. Using metallic paint courtesy of Valspar, Minneapolis College of Art and Design alum Ed Charbonneau and Jeremy Szopinski capture the spirit of motion and movement of footballs in their 17’ tall-by-127’ long mural.

The MSFA, Minnesota Vikings, SMG and Aramark, the exclusive hospitality partner and dining services provider for U.S. Bank stadium, announced that they will work with the Twin Cities’ Northeast Brewers and Distillers Association (NEBDA) to curate a craft beer destination with U.S. Bank Stadium. There will be a NEBDA-branded portable cart with a rotation of select local brews.

Joining the NEDBA brews available at the stadium, other local craft beers such as Summit, 612 Brew, Surly Brewing Company, Lake Monster, Lift Bridge, Fulton, and Finnegans will also be available at bar throughout the building.

“Minnesota’s craft beer culture is among the most prolific in the country and today’s announcement is another key component of the world-class food and beverage program being developed for U.S. Bank Stadium,” said Michele Kelm-Helgen, Chair of the MSFA. “This collaboration with our local breweries reinforces our commitment to incorporating local tastes and flavors into the menu and giving homegrown brands an opportunity to showcase their products at the new, state-of-the-art facility.”

U.S. Bank Stadium provides a comprehensive inside look at all that went into the largest construction project in state history—what makes it a distinctive football facility, and what it means for Minnesota. Berg goes into detail on the complicated and controversial history of the legislation revolving around the stadium as well as the many phases of the construction process. Relying heavily on photography, the 224-page hardback showcases construction photos as well detailed images of the stadium’s key features.

The book will be available to purchase November 1 with presales already underway. To pre-order a copy of the book, click here.